At Basement Detective we have an award winning reputation for solving mold and water problems. Sometimes that means managing exterior grading issues outside with catches and swales, or french drains, sometimes it is more efficient to manage the water inside, either way, if water must be lifted a sump pump must be used.

Sump pumps are electrically powered mechanical pump systems typically installed under the slab of subterranean basement floors to facilitate the collection and drainage of water that accumulates around and below the walls and foundations of concrete formed buildings. The image below demonstrates how pumps are situated and the basic mechanics. 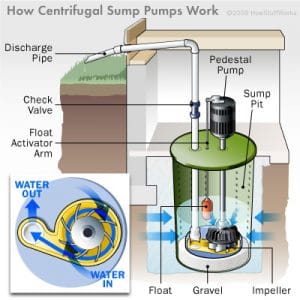 Sump pumps are commonly connected to interior subfloor drainage systems, sometimes called French Drains. In these types of drainage systems water is collected via interior (and sometimes exterior) drainage pipes often situated in or below the basement floor. These pipes drain to a collection well, commonly called a sump well, where the sump pump sits. The term for this well, whether it has a pump in it or not is a ‘sump’ (from German word sumpf, which means swamp). Sumps are otherwise commonly known as a sump wells. A ‘sump pump’ is simply the type of pump designed to be installed in these types of wells.

What is commonly referred to as a “flood due to sump pump failure” is most commonly one of two things: Either the pump was unplugged or was mechanically blocked from operating, or the house did not have an adequate drainage system connected and the sump pump was blamed for the lack of proper drainage design. Actual sump pump failure, if properly installed, is rare. The open gravel around the outside edges of a properly designed sump well system can hold a massive amount of water and is again, if properly installed, a very robust system that will protect against a basement flood or major leak.